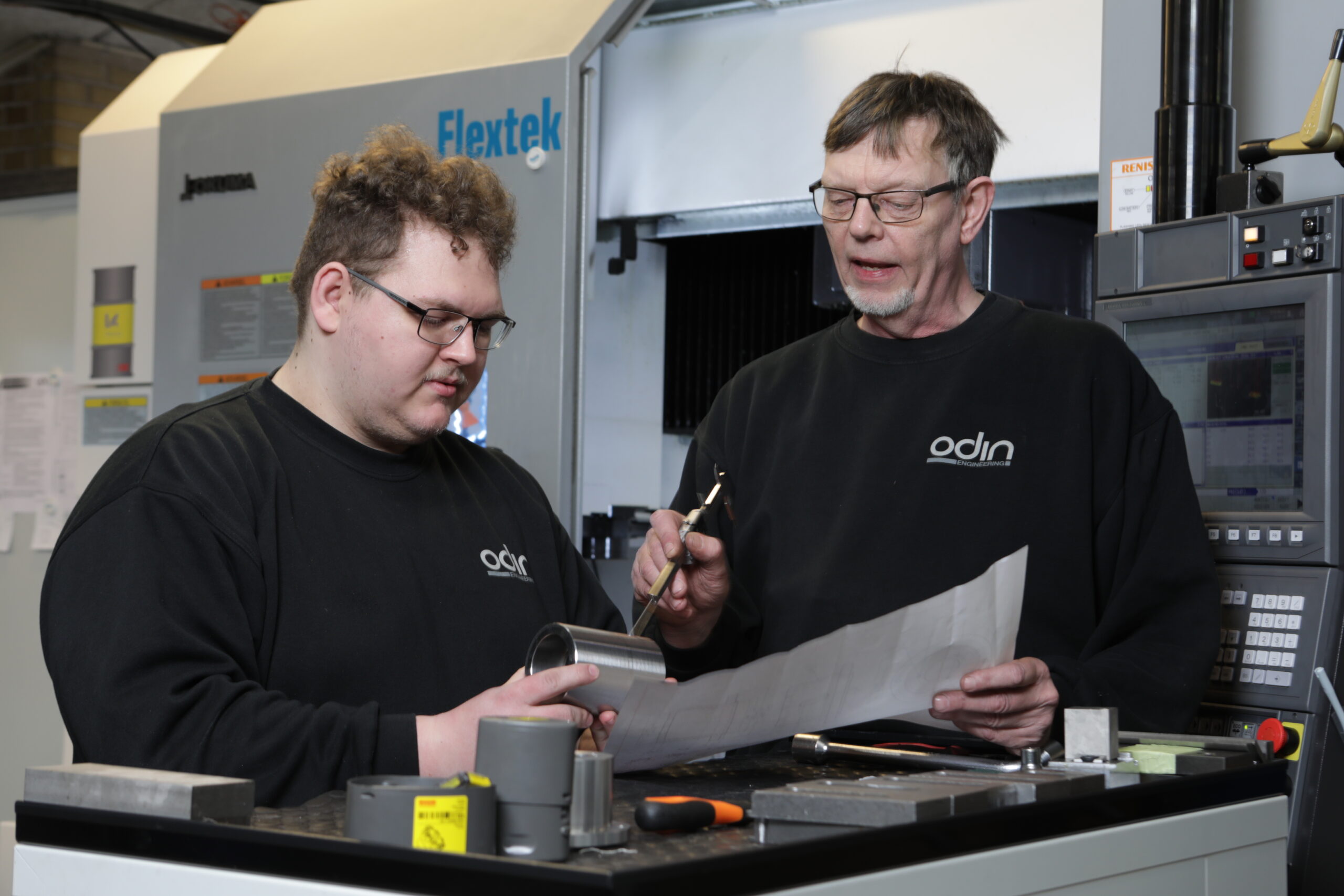 Peter wanted to become a metal worker, but a meat hammer changed his plan

Peter has been an apprentice industrial technician for almost four years at ODIN Engineering. He actually wanted to become a metal worker, but the machines at the technical school made him change plan. He has received support and guidance from ODIN’s experienced machinist Bjarne, who has been his mentor. And soon Peter will be a skilled metal worker, as his apprenticeship period ends with a final test this summer.

In 2018, Peter Ole Rasmussen did not know about the industrial technician education. The young man wanted to become a metal worker and therefore started the basic course at ZBC in Slagelse. But he was in doubt when on a tour of the school, he was introduced to the machines that mill and turn iron and metal components. The machines had aroused his interest.

“One day I was offered to try working on some of the machines. We manually turned and milled an aluminium meat hammer, and it was really exciting. When the meat hammer was done, I was no longer in doubt. I subsequently changed to the industrial technician education,” says Peter.

Peter got an apprenticeship at ODIN Engineering. For almost four years, he has been programming the machines in the factory, which turn and mill the parts for the business-critical special machines that ODIN builds for international industrial companies. And this summer, he will finish his apprenticeship, taking the final test.

Experienced machinist helps the young people
The transition from the school to the lathe at ODIN Engineering can be a radical change for a young person. That is why ODIN always has a mentor to support the apprentices and the young journeymen. Bjarne Andersen has been a machinist at ODIN for 30 years. Back in the day, when Bjarne was educated, the name of the education was machinist. Bjarne has been Peter’s mentor throughout his apprenticeship.

“One of my most important tasks is to ensure that the young people settle into the workplace. They come from a protected life in school, but now stand on their own two feet. Their first real job in an industrial company may well be a bit of a culture shock,” says Bjarne continuing:

“How do you behave in a workplace? I have to help ensure that the young people find out. Of course, I also help with the professional skills; machines, drawings, programming, and our strict quality requirements. But as a mentor, the most important thing for me is to teach them general work behaviour, and then the rest will follow.”

Peter has made both series production and single-piece production, and he has become skilled in several machines, says Bjarne. Among other things, he is very good at operating ODIN’s 4-axis OKUMA CNC milling machine.

State-of-the-art CNC machines at ODIN Engineering
Peter has learnt to program at his school, but he has become really familiar with the advanced CNC machines in the factory in Slagelse. And even though the basic principles are the same for most machines, there is still a big difference between them, he explains.

“It’s crucial that you know the characteristics and functions of the individual machine. I need to know how to set up the machine correctly so that it fits the task and the materials,” he says.

And if you think that an apprentice at ODIN spends his time cleaning and making coffee, then you can think again. From the beginning, Peter has felt like an equal employee, he says, and from the beginning he has been involved in many complicated and challenging tasks.

“ODIN takes the apprentices seriously and trust them. On the other hand, there is also an expectation that apprentices take education and work seriously. If you are willing to learn and are committed, you will quickly be involved in manufacturing the parts that are to be built into our solutions, it’s very exciting” says Peter. “And it gets better when you can see that the parts are subsequently assembled and end up with a high quality special machine that runs perfectly.”

”We clearly feel that the social activities contribute to a good atmosphere at ODIN. The goal is to bring our employees closer together to boost the good working environment that contributes to motivating the team and the individual employee.”

In 1982, the CD came onto the market and the Commodore 64 computer was introduced. 1982 was also the year

In the first half of 2022, ODIN’s three new charging stations for electric cars have delivered 37,046 kWh and a