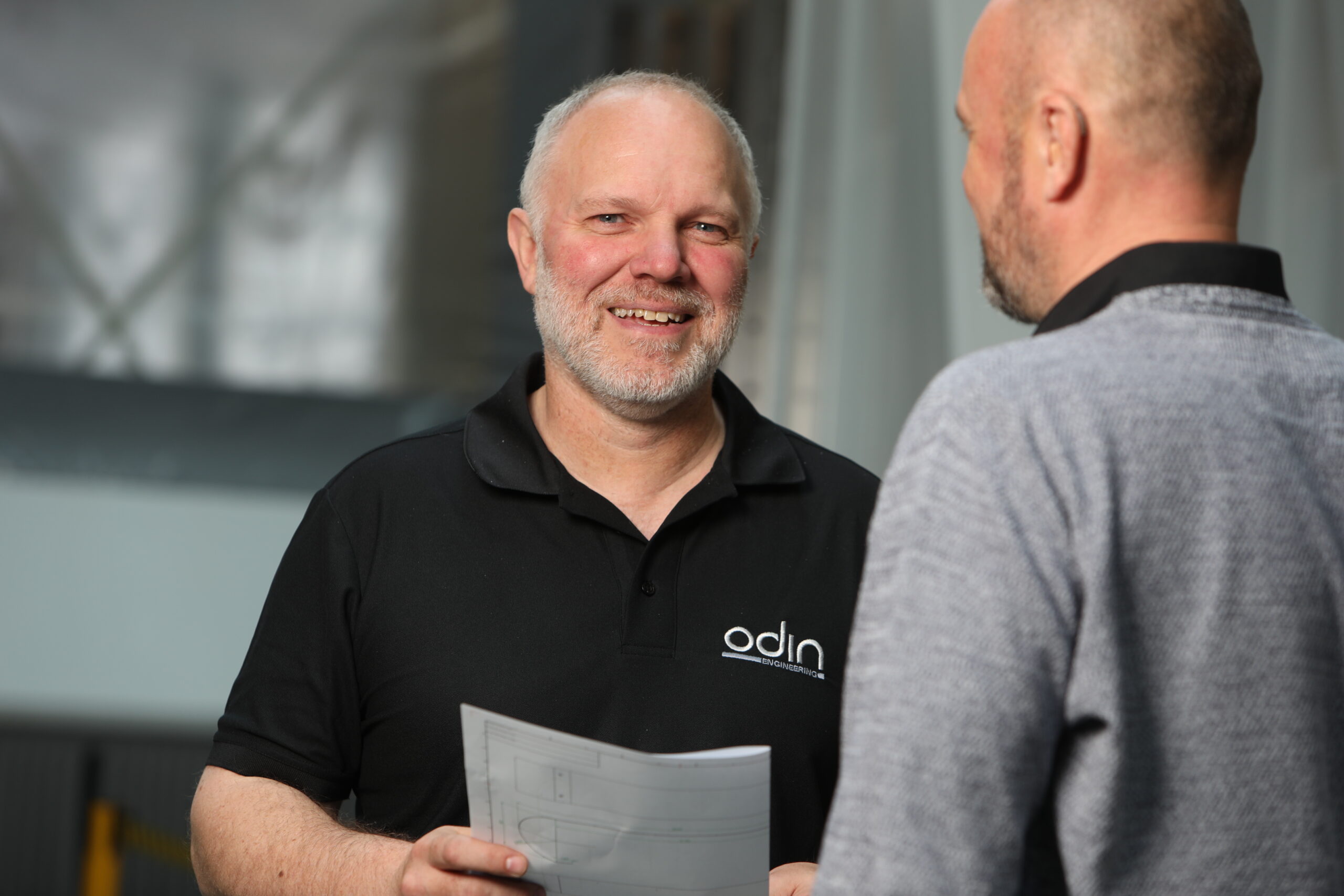 Meet Michael Skovgaard, who started at ODIN Engineering in May 2021 as a technical designer. After a few months, he switched to the PTA function at ODIN, where he immediately got busy removing practical obstacles at the future party that the company held in October. Since then, he has focused on the PTA function. Michael experiences good development opportunities and dynamics in the workplace.

Michael Skovgaard is a mechanical engineer and part of ODIN Engineering’s PTA team. His job is to ensure that there is consistency between the customers’ orders and the production. In addition, he continuously identifies ways to optimise production. About that part of his job, he says:

”It’s about efficiency. I focus on how we can use the machines optimally every single day. Are there tools that make the machines run better? Do we use the most appropriate materials? I must, of course, argue my case if I propose that we change things. But it’s always appreciated that you think outside the box at ODIN. Actually, they expect us to do so.”

In the spring of 2021, Michael joined ODIN Engineering as a technical designer and link between the R&D department and production. However, after a few months, Michael himself suggested that he be moved to the PTA function as he thought he could make a bigger difference here, he says:

”I’ve had a PTA function before, so I had a lot of experience to draw on. At ODIN, they were open to my suggestion. There is room for employees to take initiative, and the path from idea to action is short. Good development opportunities provide dynamism in the workplace.”

Room for those who can and will

When Michael describes his first period in ODIN Engineering’s PTA function, one would think that he had also been employed in the event department. He immediately got involved in the planning of the celebration of ODIN’s future party 2081, at the same time, the production at ODIN was very busy.

”I was given responsibility for removing some practical obstacles on facility and production. Our machines had to be perfect, clean, and polished on the day of the event, at the same time they also had to produce items during the days before the event, so swarf was literally flying around our ears. It was a different way of starting the job, but it says a lot about the workplace. At ODIN we pull together. Two days are rarely the same, the tasks vary from day to day, so you have to be adaptable.”

During the planning of the reception in October, Michael got around every inch of the factory, so he got to know the workplace and the production from scratch. At the same time, as a technical designer, he gained insight into the R&D department. CEO Mads S. Rasmussen is pleased that Michael has got under the company’s skin so quickly. About Michael’s first six months in the company, he says:

”Things have moved fast for Michael. In connection with our future party, he showed that he can remove obstacles. He is extremely accommodating and solution-oriented. He has been a great help so far, and there is no doubt that he has found his niche in the PTA function.”

The spirit of Gyro Gearloose

Michael emphasises that his job requires an understanding of the machines and knowledge of the production. He describes himself as a methodical person who enjoys that processes run optimally. And he does not mind that the pace in the factory is sometimes high, because spirit is correspondingly high.

”ODIN is a playground in the spirit of Gyro Gearloose. After all, there is an element of creativity in everything we do. It makes work fun, even if the ground beneath our feet burns at times. My colleagues are professional and dedicated, but there is always room for lots of ODIN humour, and I appreciate that.”

Michael dreams of being part of developing ODIN Engineering, so that the company continues to be at the forefront of customising business-critical solutions and special machines for industrial companies. Michael is 51 years old and lives in Herlufmagle with his wife Susana and their three children.

There is room for employees to take initiative, and the path from idea to action is short. Good development opportunities provide dynamism in the workplace.