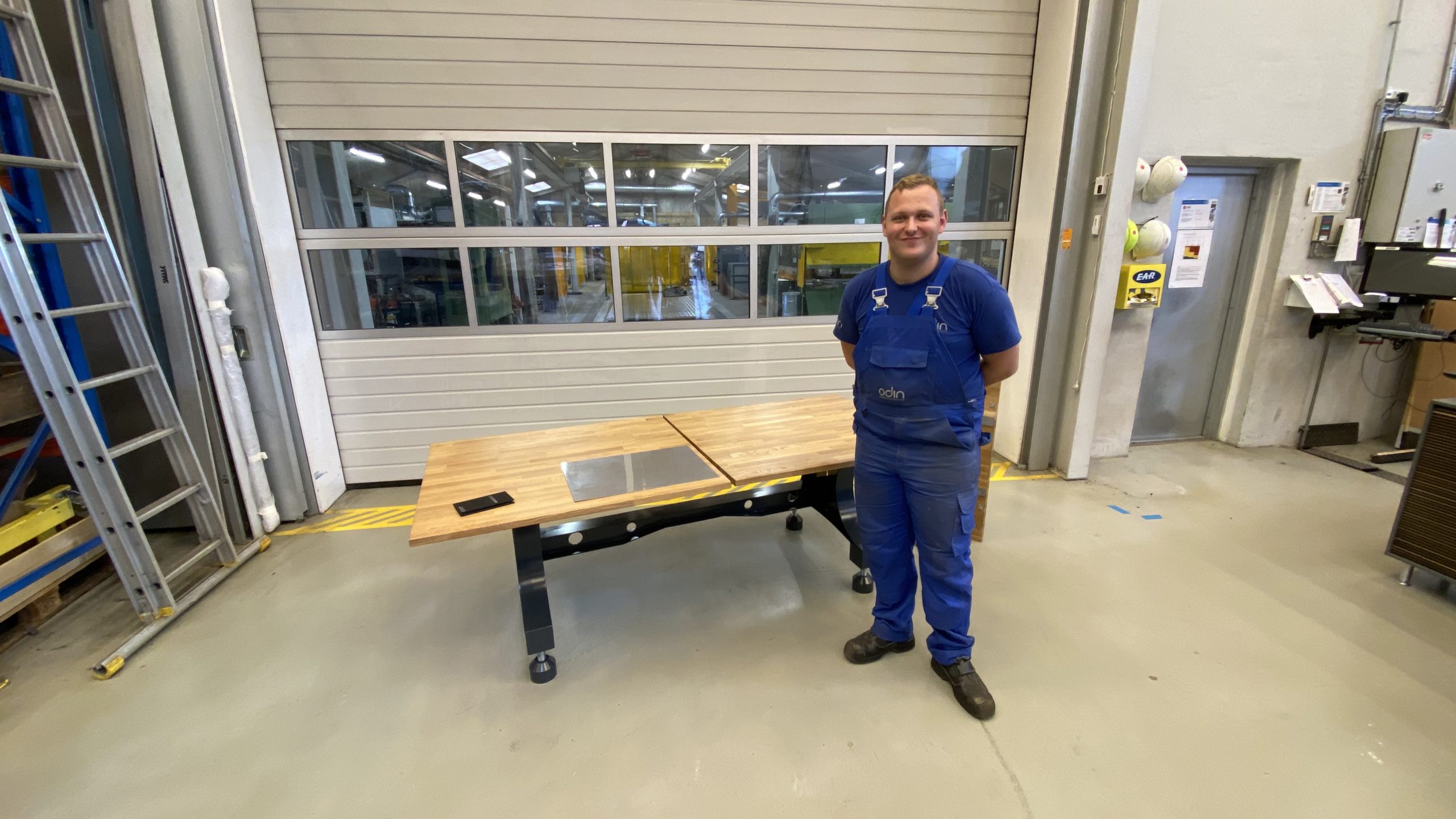 At ODIN Engineering, we have a long tradition of challenging and qualifying apprentices and equipping them with the best further training.

A good apprenticeship with challenging tasks in the forging department gave 24-year-old Philip Nordkvist the courage to embark on an extraordinary construction project for his final apprenticeship test.

With a beautiful dining table based on precise and accurate measurements, he can now call himself a skilled metal worker. He has also been rewarded with a top grade and today receives a check for an extra month’s salary.

As an apprentice metal worker, Philip Nordkvist has, among other things, worked with welding, edge bending, sheet metal processing and other forging work in steel, stainless steel, aluminium, etc. The tasks in ODIN Engineering’s forging department have been challenging and are all part of the production of business-critical special machines for our customers:

”ODIN is very committed to educating its apprentices so that we become skilled at our work. This applies not only in our own profession, but also in other areas of work. When production is in progress every day at the same time, you also get a lot of responsibility over time,” he says.

He adds that ODIN Engineering has had a fixed plan for tasks he had to go through during his apprenticeship in order to improve his skills and finish with the best result as a skilled metal worker.

”Every day, when I’ve arrived in the morning, I’ve been well received by the factory manager and the production manager, who have put me thoroughly into what I was going to do.”

The construction project for the apprenticeship test was a dining table with an extension plate.

”I’ve worked with turning of the blocks for the table and with the welds. The table is made of ordinary iron and few places with stainless steel shafts. I chose to paint the ordinary iron because ordinary iron rusts,” says Philip Nordkvist and continues:

”It was important for me to do something extraordinary that could also be used in practice afterwards. However, I don’t have room for the table at the moment, so for the time being I let my father enjoy it as a dining table.”

At ODIN Engineering, we strive to work according to exact and precise measurements, which Philip Nordkvist received special praise for in his apprenticeship test:

”It means a lot to us apprentices that we get the opportunity to be rewarded with something extraordinary. And it is a huge recognition that I’ve improved my skills during my training,” says Philip Nordkvist and adds:

”Unfortunately, my father, who himself is a skilled metal worker, did not take part in the apprenticeship test due to Corona restrictions. So it meant and touched me a lot to see and hear how proud my father became of me when I contacted him immediately after the apprenticeship test. Ten years ago, I didn’t know at all what I wanted and now I stand with an apprentice certificate and a top grade. It’s fantastic.”

Philip Nordkvist expects to spend the money on some new furniture, while the rest will probably go into the savings account.

Grandfather was a skilled metal worker at ODIN Engineering

It was not entirely coincidental that Philip Nordkvist chose ODIN Engineering as an apprenticeship.

”I live in Slagelse, where I studied at the technical college. At the same time, I had heard from several in the local area that ODIN is a good place to be for apprentices,” says Philip Nordkvist and adds:

”I’ve also received positive recommendations from my grandmother, as my grandfather worked at ODIN Engineering back in the 1980s.”

As an apprentice, Philip Nordkvist has been particularly pleased with the work discipline and the good working environment at ODIN Engineering:

”We’re equipped with new knowledge and other ways of working and thinking when, for example, we are in the workshop and in the forging department. At the same time, I have become more determined as I’ve learned how important it is to work by completely precise and accurate measurements,” says Philip Nordkvist and continues:

”I can definitely recommend others to get an apprenticeship at ODIN. You get an exciting and challenging apprenticeship, where you develop both professionally and personally and gain experience in the forging profession. It is also a good workplace with a good unity among nice colleagues. I’m always in a good mood when I arrive in the morning.”

Now that Philip Nordkvist has completed his apprenticeship at ODIN Engineering, he is looking forward to three months of permanent employment at ODIN until 16 October.

”It will be exciting to try my hand at ODIN as a skilled metal worker. Where I used to get guidance and fixed tasks in hand, I imagine that I now have to work more independently and have a greater responsibility,” he says.

See details on the Philips table – and check with the extra monthly salary that our CEO, Mads S. Rasmussen, presents:

ODIN Engineering’s staff consists of smart, practical people who work very well together. In our company, we’re all mechanical engineers.

Jan Helskov Hansen is a new member of our board of directors. We look forward to benefitting from his background

We at ODIN Engineering have made a 1,000-piece jigsaw puzzle with a design from our regular team-building day; it was

When the crisis strikes, ODIN Engineering pulls together

The coronavirus crisis has left its mark on ODIN Engineering, creating an entirely new daily round for both employees and